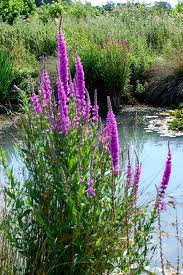 Purple Loosestrife (Lythrum salicaria)
Purple Loosestrife is a lovely bright purple flower that will take over any marshy wetland it can get its seeds spread to. Growing 3- 4.5 feet tall, it was originally brought in from Europe and Asia as an ornamental plant, and has quickly spread and taken over areas. It prefers wetlands but can survive in drier places as well. Once established in an area, it will crowd out all native plant species, including cattails, causing a disruption in the habitat and feeding habits of other fauna in the area as well.

This is one invasive species that can be controlled by a biological pest control. Two species of leaf beetle in the Galerucella genus have been found to be extremely effective at wiping out stands of Purple Loosestrife. Care must be taken when introducing the species to a new habitat to ensure that they themselves do not become an invading species. For small patches of it, pulling it before it seeds or spraying with a RoundUp Ready type of herbicide will also kill it.
References
For more information, please see:
Wikipedia- Purple Loosestrife
http://en.wikipedia.org/wiki/Lythrum_salicaria
Plant Conservation Alliance- Purple Loosestrife
http://www.nps.gov/plants/alien./fact/lysa1.htm
Iowa DNR fact sheet
http://www.google.com/url?sa=t&rct=j&q=&esrc=s&source=web&cd=1&ved=0CCwQFjAA&url=http%3A%2F%2Fwww.iowadnr.gov%2FLinkClick.aspx%3Ffileticket%3D4_u-kOYirIo%3D%26tabid%3D1044&ei=mGXUUsSsE6GI2AW0_YGACg&usg=AFQjCNGWNgJ2A__C-8JqSmKYUighPJm21g&sig2=lVilShTQlJF86UVLAOcYug&bvm=bv.59026428,d.b2I