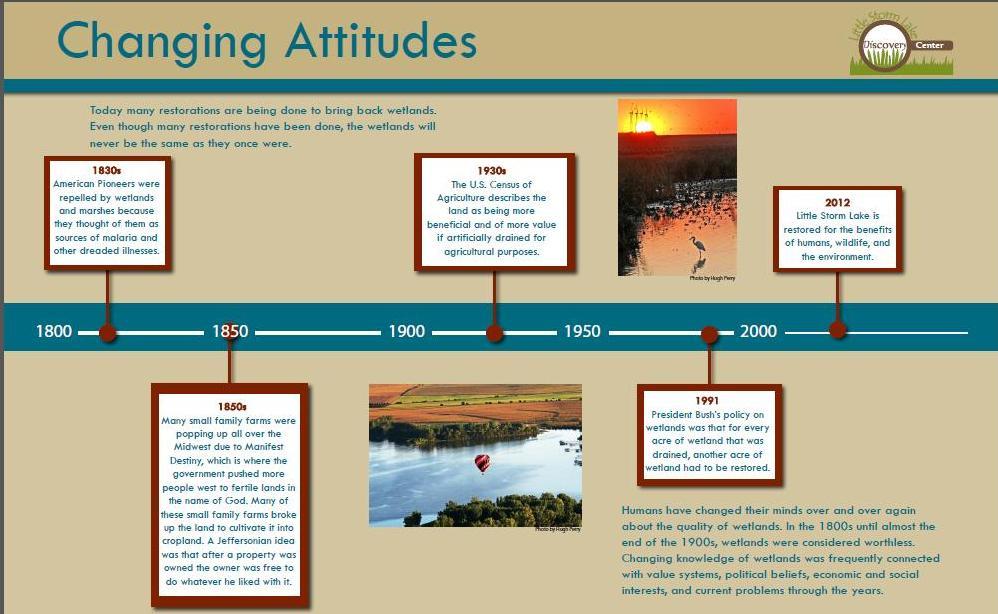 Changing attitudes timeline (from the photo above):
1830’s- American Pioneers were repelled by wetlands and marshes because they thought of them as sources of malaria and other dreaded illnesses.
1860’s- Many small family farms were popping up all over the Midwest due to Manifest Destiny, which is where the government pushed more people west to fertile lands in the name of God. Many of these small family farms broke up the land to cultivate it into cropland. A Jeffersonian idea was that after a property was owned the owner was free to do whatever he liked with it.
1930’s- The U.S. Census of Agriculture describes the land as being more beneficial and of more value if artificially drained for agricultural purposes.
1991- President Bush’s policy on wetlands was that for every acre of wetland that was drained, another acre of wetland had to be restored.
2012- Little Storm Lake is restored for the benefits of humans, wildlife, and the environment.

For more information on how attitudes have changed about wetlands over the past years, please check out some of these websites, videos and books.

Wetlands of the American Midwest: A historical geography of changing attitudes By Hugh Prince
Hinterland Who’s Who- http://www.hww.ca/en/where-they-live/wetlands.html
Purdue University Everything Wildlife- http://www.agriculture.purdue.edu/fnr/wildlife/publications/v-fnr-7.html (click the link on the right side of the website’s screen to view for free)
Bill Nye, The Science Guy: Episode 57: Wetlands- http://www.youtube.com/watch?v=3oGymnSJ4Ek
Wisconsin DNR: Waking up to Wetlands-
http://dnr.wi.gov/topic/wetlands/locating.html