Native American’s in Iowa
Iowa is actually a Sioux word, meaning sleepy people. The Dakota Sioux were one of several Tribes that could be found throughout Iowa. The others included the Ioway, the Illini, the Otoe, and the Missouria. Each of these had a distinct culture and way of life. Below are lists of resources for each of the different tribes if you would like to learn about them more in-depth. The remainder of this page is devoted to the Chan-ya-ta tribe, whose settlement was located 12 miles north of Alta in Buena Vista County. 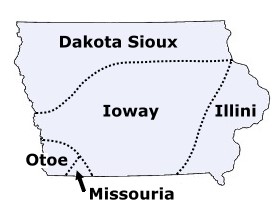 The Chan-ya-ta: A Mill Creek Village
A collection of artifacts and more information can be found at the Buena Vista County Historical Society. There is not much known about this particular group of Native Americans. In depth study has not really been conducted the way it has on some of the larger tribes in Iowa and throughout North America.
The Chan-ya-ta were part of what is known as the Mill Creek grouping of Indians. This group of people is believed to have lived sometime between A.D. 900 and A.D. 1300. The name comes from one of the first settlements excavated, along Mill Creek. The settlements fall under what was considered Little Sioux territory, mostly in Northwestern Iowa. Only a few of the sites have ever been excavated, including the Chan-ya-ta site in Buena Vista County. The Chan-ya-ta site is located ½ mile from Brooke Creek, near where it meets the Little Sioux River.

The Chan-ya-ta appear to have lived in semi-subterranean homes, often described as a cross between wattle and cub construction homes and earth lodges. The site for a home appears to be excavated, then a light frame of posts constructed and covered in a woven frame of twigs and branches. Bundles of thatch were then attached and a mud plaster was applied over this. It is not clear whether loose dirt or sod was then put over this.

They were farmers but did do big game hunting with the animals that roamed the area (bison, elk, and deer). Bison in particular appear to have been important, both for food and for other necessities like tools, clothes, etc. Many of the tools found in the settlement are made of stone or bone. There were also a number of pottery fragments discovered from various sized bowls and jars used in cooking, food preparation and storage as well as clay pieces for smoking, decoration, and ceremonial uses. The Chan-ya-ta appear to have nuclear family units living together. Historians think that the society was a matriarch, meaning family lines were traced through the mother