Jumping Silver Carp (Hypophthalmichthys molitrix) also known as Asian carp
Originally imported to North America for alga control in aquaculture, the Silver Carp soon escaped and began spreading throughout rivers. These fish can reach high population densities. Weighing in at more than 40 Ibs full grown, these fish have the ability to jump 10 ft out of the water when disturbed, leading to their name. Silver Carp are filter feeders, feeding almost constantly, leading to heavy competition with native fish populations. They are most well-known for incidents that have occurred when uncovered personal water craft have driven by schools of them, causing them to jump out of the water. (See below for link to video) Because of their large size and the high speeds of the water craft, several injuries have occurred.
References
For more information, please see:
Wikipedia- Silver Carp
http://en.wikipedia.org/wiki/Silver_carp
MN DNR- Silver Carp
http://www.dnr.state.mn.us/invasives/aquaticanimals/asiancarp/index.html
Video- Jumping Silver Carp
http://www.youtube.com/watch?v=jb8OmEr7VqI 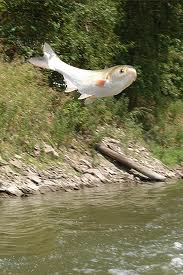